THE NAKED SOCIETY by Vance Packard: A Review 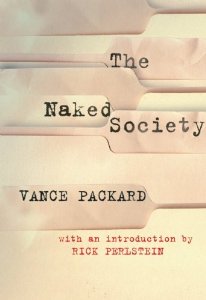 The Naked Society is a book from the sixties written by journalist/author Vance Packard who was considered the Michael Moore/Alex Jones/Jesse Ventura of his day. This book is about the U.S. government's growing surveillance of its citizens. With everything that's been in the news lately about that one whistleblower who released details about how the government was spying on citizens by "gathering" their various communications through their phone records, e-mails, etc., etc. under the guise of "protecting" them from terrorists, I feel this book is just as relevant today--perhaps even more so--as when it was first published. What's kind of scary is that some of the spying techniques that Packard reveals in his book are not only still in use today by not only the government but by corporations and various other agencies but have actually been added upon, especially with the advent of the Internet and whatnot that, of course, wasn't there back when this book was initially published. This book is a good read for anyone who is concerned about the growing lack of (so-called) privacy in American society that's growing increasingly "naked" by each & every day.﻿
Posted by Tony Banks at 11:50 PM

As Good As She Gets